The shy albatross, Thalassarche cauta, breeds only on three Tasmanian islands; Albatross Island in western Bass Strait, and Pedra Branca and the Mewstone in the south. The naturalist John Gould was the first to describe the species in 1840, and noted “that the present bird differs from all other species in the extreme caution with which it avoids rather than approaches the neighbourhood of vessels at sea”, conferring the specific name, cauta from the Latin for cautious.

Albatross are renowned for their ability to fly great distances. Elongated wings allow effortless gliding flight as they exploit the winds to cover hundreds of kilometres in a day, searching for food in the vast open ocean. Shy albatross are no exception – they remain almost exclusively at sea and may travel as far as South Africa during the first few years of their life. Shy albatross begin returning to their colony of origin once they reach three or four years of age. First they must find a mate with whom they will form a long lasting pair-bond. This bond is developed through a series of courtship rituals that are unique to the species, involving dancing and display, vocalisations and feather preening. These bonds may take several years to develop and strengthen – most birds do not begin breeding until they are at least six or seven years of age. When a strong bond is formed and the pair is ready to breed, they build a high mud nest, copulate and, soon after, the female lays a single large egg. The breeding season is highly synchronised, with all eggs in a colony laid during a short period in late September. Both parents share breeding duties. One bird will sit on the nest for days at a time, their only task to incubate the egg and protect it from the elements and predators. They do not move from the nest, they do not eat. The partner forages at sea for up to ten days, searching for the small fishes and squid or cuttlefish that are their preferred prey. Reunited at the nest, the pair may spend time reinforcing their bond by mutual preening or some nest maintenance, before swapping roles. This pattern is repeated for the next 70 days until the chick hatches.

Many eggs do not make it to hatching. Albatross colonies are crowded and chaotic places and mishaps are common. Birds squabble vigorously with neighbours and incoming birds with misjudged or ungainly landings can break eggs. Others have poorly built nests that offer the egg little protection from sharp stones, rolling away, or flooding rains. Chicks hatch from surviving eggs in December, weighing around 150 grams. Newly emerged chicks are particularly vulnerable to weather extremes and predators. The parents continue to brood their chick on the nest until it is large enough to fend for itself. Both parents then spend most of their time at sea, independently searching for food and bringing back regular meals to their rapidly growing chick.

Over the four month chick-rearing period the chick will consume approximately 40kg of food. By April, the chicks have grown to their adult weight of five or six kilograms, are fully feathered and ready to fledge.One by one, fledglings launch themselves off the high island cliffs for the first time. This is one of the most critical times in the life of an albatross; young naïve birds must immediately learn to both fly and to find their own food. Many do not survive.

Once the chick has fledged, the parents spend the next four months foraging to regain body condition – raising a chick is hard work. Before long, the surviving parents reunite to defend and rebuild their mud nest, engage in their courtship rituals, copulate and lay again. Shy albatross can live for over 30 years – these survivors will have many opportunities to breed. However, only a small fraction of the eggs laid by a female in her lifetime will survive the long process of incubation, chick-rearing and the many challenges at sea to become a breeding adult. 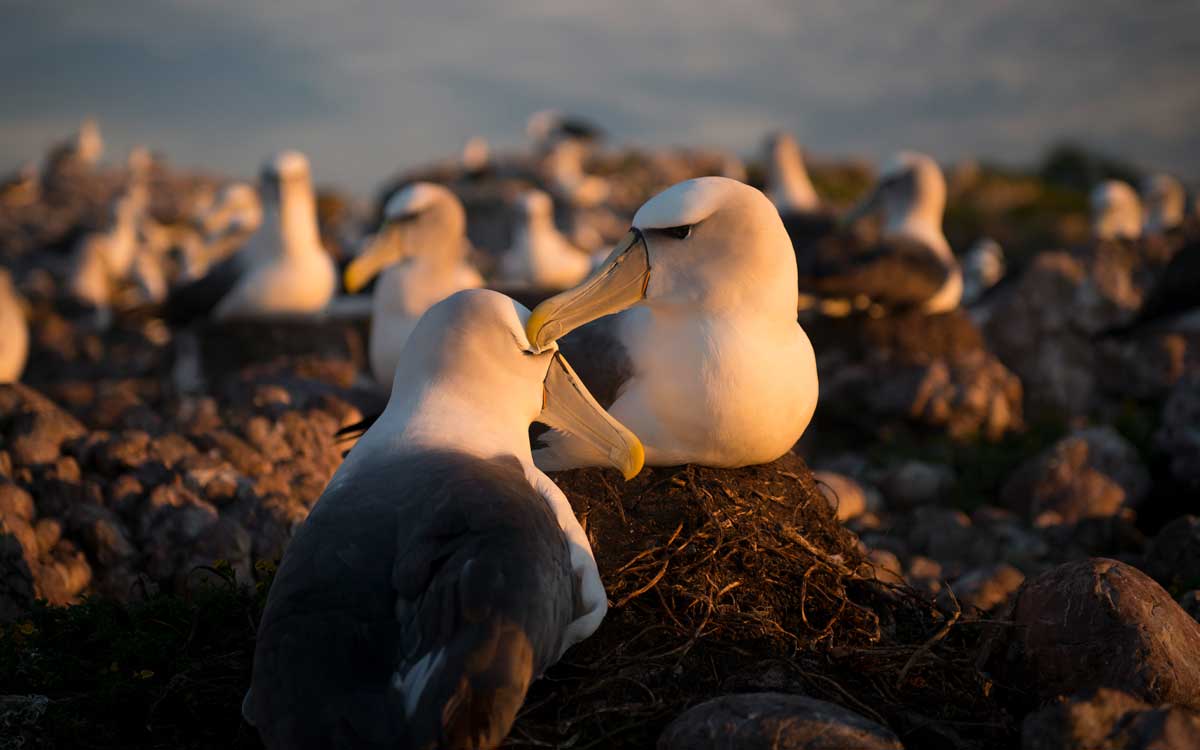 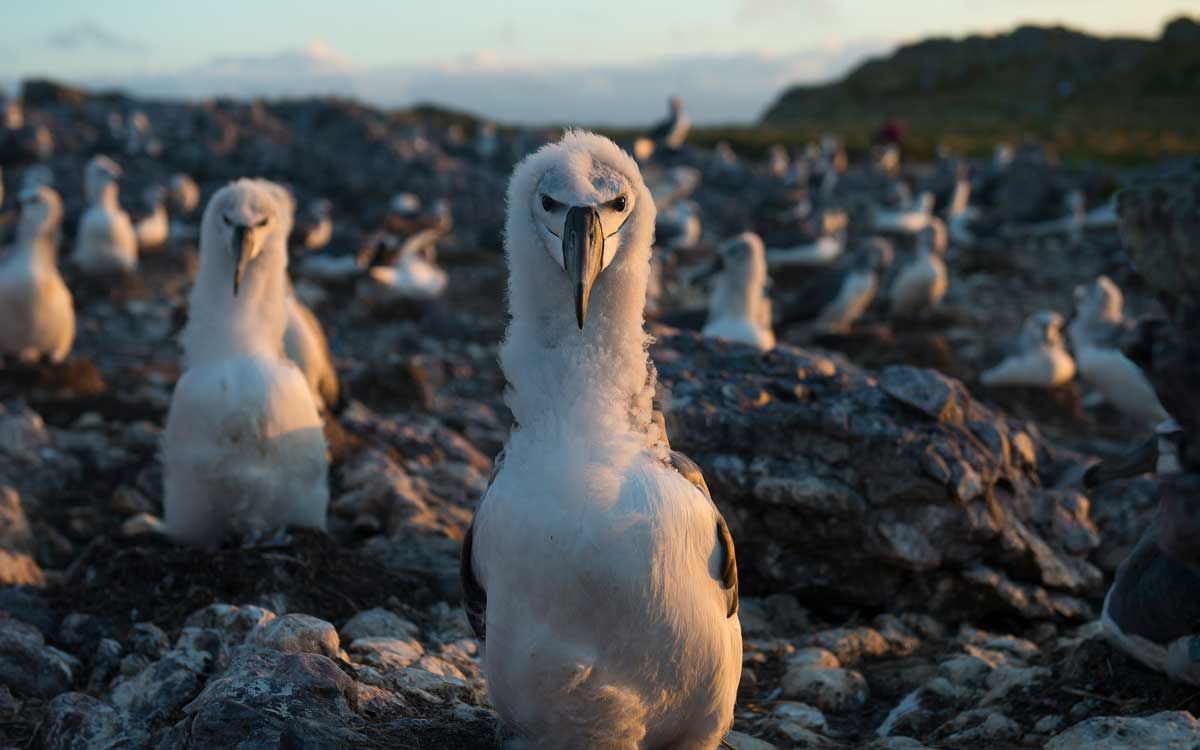 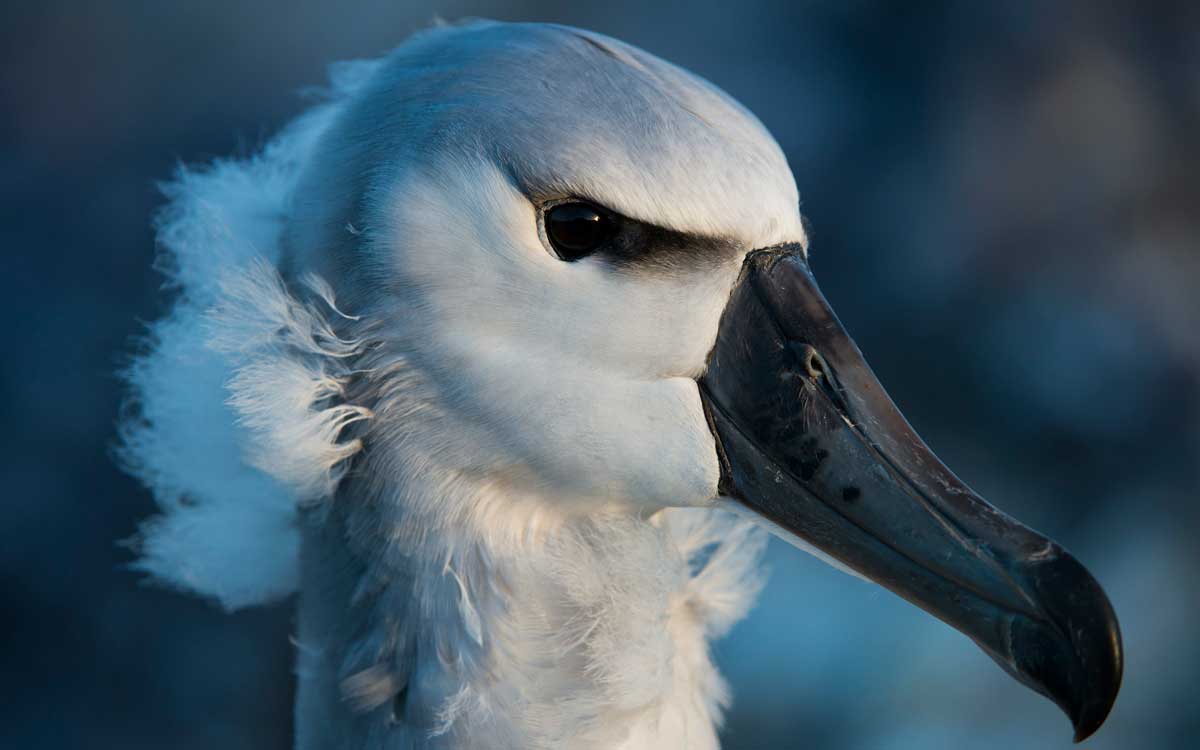