In the early 1980s, biologists from the Tasmanian State Government initiated a conservation monitoring program on Albatross Island that has evolved and continues to the present day. Several times a year, a small research team makes its way to the island to spend about a week collecting a range of data. These trips are planned to coincide with key phases in the breeding cycle of the shy albatross. Even today, the timing and duration of these trips is determined by the weather. Passage across the short stretch of Bass Straitand transfer from the boat to the island is only possible in mild conditions.

These trips are entirely self-sufficient and focus on minimal impact research. We must carry all our own food and water supplies onto the island with extra as a change in the weather can prevent departure for up to a week. We set up camp in a cave that affords some protection from the elements, but life on the island is typically cold, often wet and always windy. In the past, the bird harvesters exploited the fact that shy albatross remain on their nest rather than fly away. Today, we use this tenacious behaviour to collect valuable data for conservation with minimal disturbance at the colony. At the end of each breeding season, a uniquely numbered metal band is applied to the leg of a pre-fledging chick. This band is used to monitor the bird over its lifetime.

During incubation, we undertake a roll call of breeding birds. Moving slowly through the colony we are able to systematically check the bands of nesting adults, transcribe the unique number and record the presence of an egg. While outwardly, our proximity appears not to distress them, we still take great care to move slowly, quietly and low to the ground to minimise any impact. With many hundreds of bands recorded each visit, it makes for slow, repetitive and sometimes painful work. Crouched in between nesting birds, you are often within striking range of the sharp tipped bill of several neighbours.

Over time, the data we collect enable us to follow the fates of known individuals throughout their lives. Did the young birds survive and return to the colony to breed several years later? Did the adults recorded in one season survive to the return in the next? Did they lay an egg this year? Were they successful? How do these patterns change with age? Given that adult birds can live to more than 30 years of age and do not start breeding until at least five years old, albatross studies require decades of continuous annual data collection. Such long-term study is the only way to ensure accurate and timely knowledge of how the population is faring. We know that the breeding population was recovering from past exploitation, but recovery appeared to stabilise in the early 2000s at less than half the estimated historical size.

Recently, the breeding population has started to decline. Two factors appear to explain this pattern. Firstly, there is a decline in breeding success, which means that albatross pairs have become less likely to successfully raise a chick. The second factor is a decline in juvenile survival – fewer chicks that fledge from the island are surviving their juvenile years to return to the island and breed. We are now working to understand what is causing these trends – a difficult problem.

The genus name for this species, Thalassarche, is Greek for “of the ocean”. The time that we are able to observe them in the breeding colony represents only a portion of their lives. To properly understand albatross, we need to know what happens on the oceans. Where do they forage and why? What changes and processes might be occurring in their foraging environment? And how do these relate to breeding trends back at the colony? One way to answer these questions is to follow them on their foraging journeys. We use miniaturised tracking devices, weighing less than 30 grams, taped temporarily to feathers on the back of the bird. Some devices communicate with satellites, allowing location data to be obtained in real time, others record the information and to download the data the units must be retrieved when the birds return to the colony. These tracking studies, combined with other complementary investigations into breeding biology and diet allow us to understand some of the threats to shy albatrosses. Given this insight, what, if anything, can be done to help them? 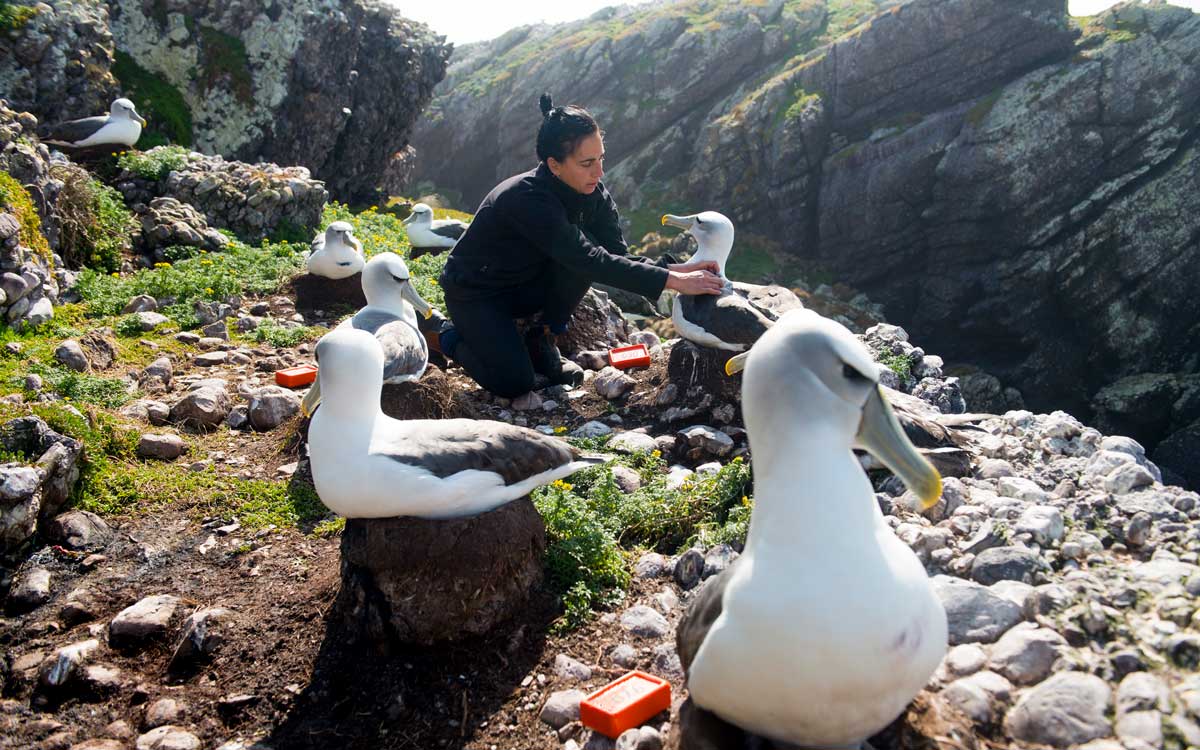 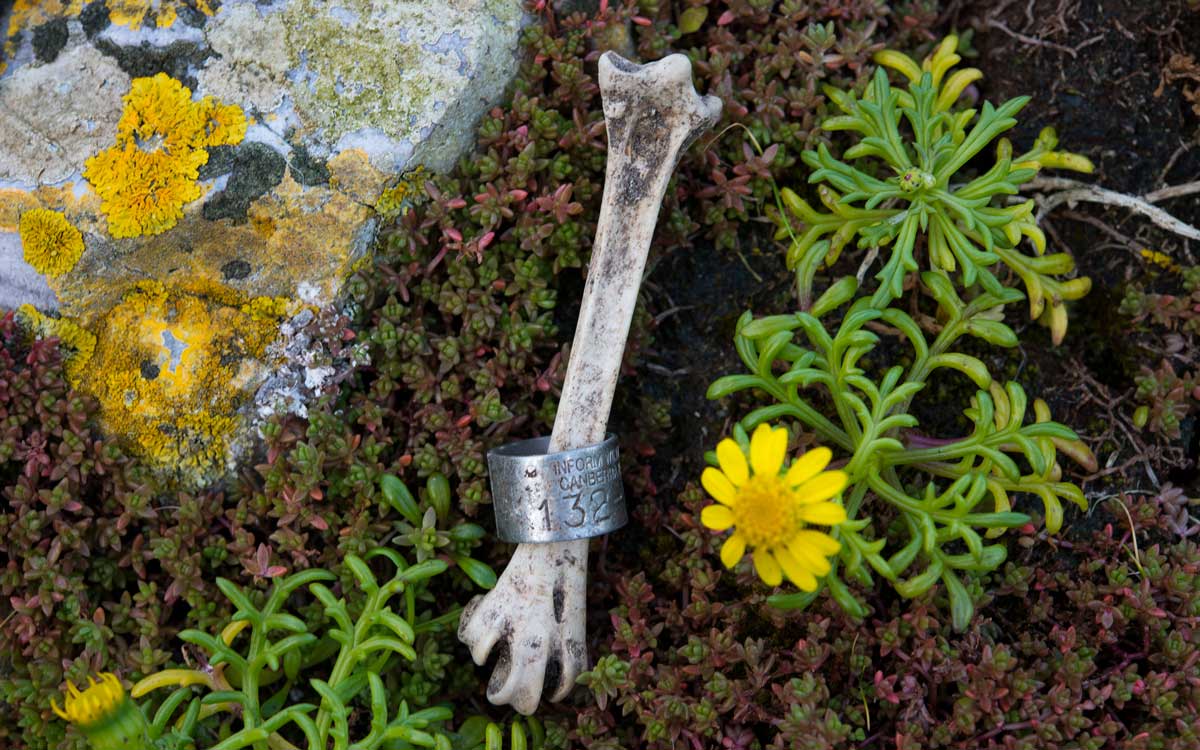 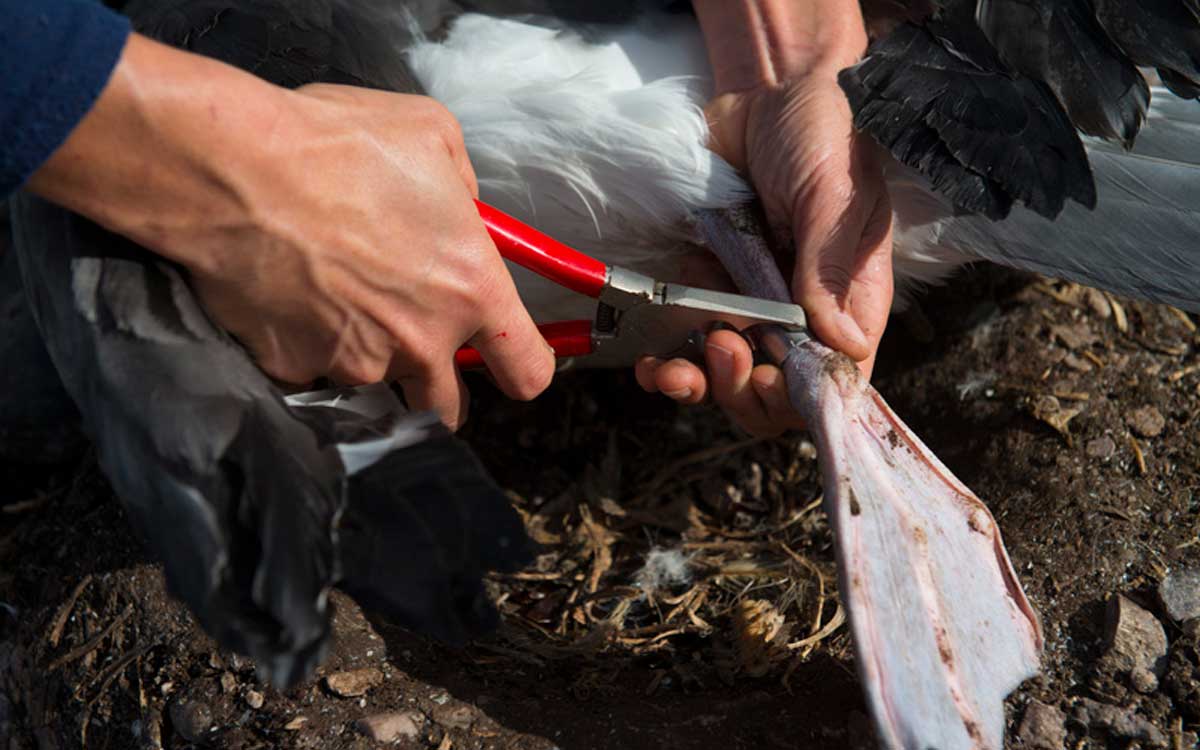